Social media is a bit like art—most of us are pretty sure we know what it is, but articulating a common definition can be challenging. There are many definitions of social media floating about of course, they just aren’t consistent.

Social media “are primarily Internet- and mobile-based tools for sharing and discussing information” according to Wikipedia. It is “the use of technology combined with social interaction to create or co-create value” according to John Jantsch, a “shift in how people discover, read, and share news and information and content…a fusion of sociology and technology, transforming monologue (one to many) into dialog (many to many) per Brian Solis, “online communications in which individuals shift fluidly and flexibly between the role of audience and author” in the view of Joseph Thornley, and “a category of practices, technology, tools, and online sites that are based in social relationships, participation, and user-generated content” in the words of Liz Strauss.

My own definition incorporates the 4 C’s of social media, or the “4 Cons” if you will: “online tools that permit users to create content, within a given context, to help establish connections and engage in conversations.” Okay, that’s a bit awkward in words, but makes more sense as a picture: 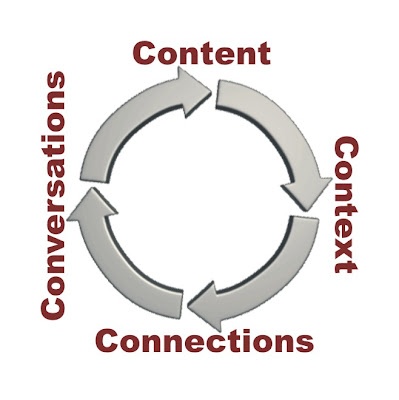 The starting point is typically content—a blog post, video, podcast, article, photo, a resource such as an industry-specific glossary or calendar of events, or other means of expression. The context in this case is the particular tool, website or other online venue where the content will be shared: in a blog, a social networking or bookmarking site, a media sharing site (e.g. Flickr or YouTube), a wiki, a forum, a Squidoo lens, wherever. Sharing content enables one to make connections; to find people with similar interests. For example, someone with an interest in enterprise data warehouse technology will probably read data warehouse blogs, watch data warehouse videos, listen to data warehouse podcasts, and follow people who write about enterprise data warehouse technology on Twitter.

Finally, sharing content with those interested in the topic leads to conversations. These can take the form of interaction on a social sharing site like Searchles, blog comments, Twitter replies, LinkedIn messages, writing on a Facebook wall, or other means of online dialog.

The online conversations themselves are content (closing the loop), and can also lead to the creation of new content: for example, a conversation with Cece Salomon-Lee that began with blog comments and Facebook led to her writing several guest posts on this blog, and a conversation on Twitter led to me writing a guest post on SEOmoz.

However defined, it’s clear that social media embodies a set of tools that enable anyone to be a media producer as well as a consumer, and that force traditional media outlets to now participate rather than just broadcast. As the recent example of Skittles first turning its website entirely over to social media and then pulling back, companies and brands are still struggling with exactly how to best utilize these tools. But with the continuing explosion of new tools and venues for online social interaction, the worst mistake marketing and PR practitioners can make is to have no social media strategy at all.

Note: This post was originally published on the WebMarketCentral blog in March 2009.