This post was originally published on the WebMarketCentral blog in July 2009.

A traditional grandmother that is, not a tech-savvy one. If you have or know a mother, grandmother or great grandmother who grew up in the first part of the last century, chances are she’s passed along some folk wisdom about good old-fashioned manners. Sure, it can help to utilize the growing number of Twitter tools available as well, but if your Twitter grade isn’t as high as you’d like it to be, you may want to take some tips from grandma: 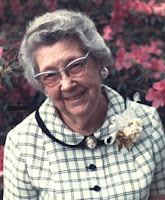 “The good Lord gave you two ears, but only one mouth.” In other words, to attract and keep followers, spend more time listening than talking. “Listening,” in Twitter terms, means answering questions, re-Tweeting interesting thoughts and links, and sending @ replies.

“Have something interesting to say.” No one really cares if you just got back from the gym, had a latte or are watching TV with your cat. They do care if you can help them solve a problem, learn something new, or at least have a laugh.

“If you can’t say anything nice, don’t say anything at all.” Twitter isn’t a place for arguments or feuds—unless you want to embarrass yourself and look like a jerk. There are many individuals that I admire in the online marketing space, like Paul Dunay, David Szetela, Ardath Albee and Ian Lurie. I’m happy to tweet or retweet their stuff occasionally. There are also, unfortunately, more than a few obnoxious boors in this space, but they aren’t worth mentioning.

“It’s better to keep your mouth shut and appear to be an idiot than to open your mouth and prove it.” It should be obvious, but remember that Twitter is a public space, so be careful what you say. Don’t tweet when you’re angry or in a chemically-altered state. And don’t ever do something as stupid as trying to take advantage of tragedy to send spammy sales messages, as Habitat recently did with the Iran election aftermath.

“If don’t ask for exactly what you want, you won’t get it.” Obviously, you’d never walk into a crowded restaurant, announce to no one in particular that you’re hungry for a cheeseburger, and hope that the person who’ll be waiting on your table happens to hear you. Twitter is a busy place. Not all of your followers will see everything you tweet. In fact, most of your followers will miss most of your tweets. So if you want something specific—an answer, a retweet, an opinion on something you’ve written—from someone specific, use an @ reply to ask for it.

“Say ‘please’ and ‘thank you.'” Following from the item immediately above, others are more likely to do the things you ask if you ask politely, and more likely to continue doing them if you also thank them. Publicly. Which makes them look helpful. Of course, it’s also important to reciprocate.

“Clean up your place before inviting friends over.” In Twitter terms, this means making sure you’ve optimized all the elements of your Twitter presence: name (your real one), linked page (your website, blog, or for the really advanced: a customized Twitter landing page like @pistachio has), bio (make the most of the limited space), picture (preferably your real one, NEVER the Twitter default image), and background (yeah, mine needs work I know—shoemaker’s children kind of thing). Here’s an example of a nicely done Twitter background from @Tony_Mandarich.

“Birds of a feather flock together.” Other than using the block feature, you have no control over who follows you on Twitter—but you have absolute control over who you choose to follow back, and the entire Twittersphere can see your list. Granted, it’s generally good Twitter etiquette to follow back when someone follows you, but it isn’t always necessary, particularly when a person doesn’t use his or her real name and real picture, or doesn’t provide any real value. Spammers, scammers and strippers abound on Twitter, and they are all best to avoid when following.

Who knew grandma was a Twitter expert? She may be more hip than you think.